The Origin of SARS-CoV-2 is a Riddle-

Meet the Twitter Detectives Who Aim To Solve It 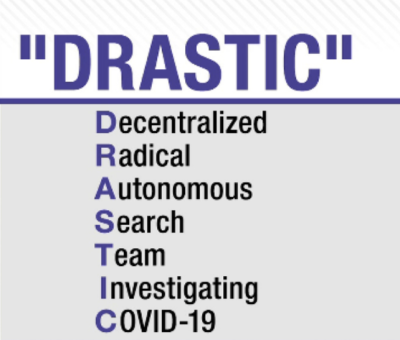 Many D.R.A.S.T.I.C. Members, especially “China Experts” and Scientists prefer to operate anonymously due to privacy, security and professional concerns, and are thus not listed on this page 1)

To be safe, please create your own Proton e-mail address at protonmail.com. Once you have your proton email address, please use the Proton Mail web interface to send us an email to drasticgroup@protonmail.com.

The key is to use Proton Mail on your side too so that all the email communications are fully done within Proton. Do not send us an email from your usual email address.

Why Proton Mail? Because it is fully hosted in Switzerland and uses encryption at all steps. Just remember: do not save your Proton Mail password in your browser.2)

Rebuttal of the Lab Leak Hypothesis

Reactions to the Lab Leak Hypothesis

Virologists study dangerous viruses. They collect them from the wild, they study them in labs, and they genetically engineer them. One goal of their research is to help prevent future pandemics.

However, viruses have escaped from laboratories around the world on several occasions. New techniques for bioengineering can enable dangerous viruses to be created in research laboratories.

Previous pandemics such as SARS and MERS have arisen naturally as viruses jump from species to species and evolve through natural selection. The lab leak hypothesis proposes that the SARS-COV-2 virus responsible for Covid-19 did not arise naturally but escaped from a virology laboratory, the Wuhan Institute of Virology (WIV) [Segreto20] [Deigin21].

The Importance of the Hypothesis

If SARS-COV-2 did result from a lab leak then such research needs to be much more carefully controlled in order to prevent any future outbreak of an even more potent virus.

There is no suggestion that the leak was deliberate. The Wuhan Institute of Virology published their impressive results and collaborated openly with other virologists around the world. For example, their chief scientist Shi Zhengli collaborated closely with Ralph Baric of the University of North Carolina. The Wuhan Institute of Virology is a well respected member of the international community of virologists.

Until recently, any suggestion of a laboratory leak was discounted as an unsubstantiated far right conspiracy theory. However, as more and more evidence has accumulated many leading scientists now consider the theory plausible if not proven.

This paper should not be viewed as an attack on China. But rather, it provides a strong motivation to review the practice of virology internationally. Beyond Reasonable Doubt

There will never be a mathematical proof that SARS-COV-2 is the result of a laboratory leak.

However there is now a large body of evidence to support a leak hypothesis. Taken collectively we believe that it proves the hypothesis well beyond any reasonable doubt. But the reader is encouraged to review the evidence and draw their own conclusions.

There is no absolute proof. But there is most certainly plenty of evidence.

Our Publications 1. Lab-Made? SARS-CoV-2 Genealogy Through the Lens of Gain-of-Function Research By Yuri Deigin 10)

2. Lethal Pneumonia Cases in Mojiang Miners (2012) and the Mineshaft Could Provide Important Clues to the Origin of SARS-CoV-2 By Monali C. Rahalkar and Rahul A. Bahulikar 11)

3. The genetic structure of SARS-CoV-2 does not rule out a laboratory origin By Rossana Segreto and Yuri Deigin 12)

5.SARS-CoV-2's claimed natural origin is undermined by issues with genome sequences of its relative strains: Coronavirus sequences RaTG13, MP789 and RmYN02 raise multiple questions to be critically addressed by the scientific community By Yuri Deigin and Rossana Segreto 14)

6.The genetic structure of SARS-CoV-2 is consistent with both natural or laboratory origin: Response to Tyshkovskiy and Panchin By Yuri Deigin and Rossana Segreto 15)

12. The Anomalous Nature of the Fecal Swab Data, Receptor Binding Domain and Other Questions in RaTG13 Genome By Monali C. Rahalkar and Rahul A. Bahulikar 21)

13. An Introduction to Wuhan BSL-4 Engineering By Rodolphe de Maistre 22)

This is a fantastic episode covering the recent discrepancies in the data uncovered by analysis of the monthly medical reports from the US military. The authors of 'Prometheus Shrugged“ and “Rounding the Earth” blogs on SubStack join Sherlock Ohms for a discussion you don't want to miss.24)