The Wuhan Institute of Virology (WIV) is a research laboratory in the Hubei province of China that is adminstered by the Chinese Academy of Sciences (CAS). Most notably, WIV runs China's only biosafety level 4 (BLS-4) laboratory. Most notably, that BLS-4 WIV lab performed research on coronaviruses for years up through the emergence of SARS-CoV-2 and the COVID-19 pandemic, which was observed as an outbreak centering around the densely populated city of Wuhan.

The WIV broke ground in 1956, originally named the Wuhan Microbiology Laboratory. After suffering a series of name changes over the years, WIV stuck in 1978.

The Center for Emerging Infectious Diseases at the WIV is managed by virologist and researcher of SARS-like coronaviruses, Shi Zhengli.

In April 2012, six miners became ill after entering a disused copper mine inhabited by bats in southwest China, and three died. Researchers from the WIV were called in to investigate. They discovered several new coronavirus samples in the mine.1)

In 2013, researchers at the Wuhan Institute of Virology published a paper saying that Dr. Zhengli Shi and EcoHealth Alliance's Dr. Peter Daszak found CoVs that were 95% identical to human SARS-CoV in Chinese horseshoe bats. Further, these CoVs “were able to use human angiotensin-converting enzyme 2 (ACE2) receptor for docking and entry.”2)

The WIV as at the center of some versions of genetic engineering and lab leak hypotheses of the origins of SARS-CoV-2. The first reported cases of COVID-19 were in nearby residents of Wuhan.

The National Institutes of Health deleted information about COVID-19 genetic sequencing during the pandemic at the request of researchers in Wuhan, China, a move that created consternation in science circles, according to emails obtained by a nonpartisan whistleblower and government oversight group.

The emails obtained by the Empower Oversight group show a Wuhan University researcher submitted virus sequence information to the NIH's Sequence Read Archive in March 2020 – the same month the World Health Organization declared a pandemic and about two months after the virus was detected in Wuhan.

The scientist made an additional submission on the virus in June 2020, according to the emails. Later that day, he asked the NIH to retract the submission, claiming it was made in error.

The NIH responded by saying it preferred to edit or replace submissions over replacing them.

A few days later, the researcher submitted another request to withdraw the genetic sequence from the NIH database, according to the emails.

The NIH agreed to the researcher's request one day later, and asked for clarification on whether another submission should be deleted.

“I had withdrawn everything,” an unnamed NIH official said to the Wuhan researcher in an email.

The emails were obtained after Empower Oversight sued the NIH under the Freedom of Information Act. You can read them here. File - nih-foia-request-56712_redacted.pdf 5)

The documents also show an expert advised then-NIH Director Francis Collins and Dr. Anthony Fauci, who leads the agency's National Institute of Allergy and Infectious Diseases, that COVID originated outside of the Wuhan food market, as the Chinese government has claimed.

Additional emails show that the NIH directed reporters to more favorable coverage about the deletion.

“Off the record: we think this WaPo story does a good job characterizing the situation,” NIH's Renate Myles wrote to a reporter at The Hill newspaper, directing the journalist away from a New York Times story because of its “tone.”

“These documents raise several questions that need further investigation to answer fully,” according to a report by Empower Oversight, founder by a former top staffer for Iowa GOP Sen. Chuck Grassley. “Congress should press the NIH for answers on why it is stonewalling Senate inquiries and dragging its feet on basic transparency through FOIA.”

The group says one of the most disconcerting elements of the emails is evidence showing the NIH has refused to participate in a transparent process to examine data on the deleted sequences.

“Most importantly, why has NIH refused to examine archival copies of deleted sequences in an open scientific process to determine whether any of that information might be able to shed light on the origins of the COVID-19 pandemic?” the group asked.

However, that argument was dismissed by NIH official Steve Sherry.

Although sequences are never fully deleted, according to the agency, Sherry told a researcher who asked for transparency, “As you know, when data sets are withdrawn from the database, that status does not permit use for further analyses.” 6)

Last night a preprint was published by Jesse Bloom, a virologist at the Fred Hutchinson Cancer Institute, on how he recovered SARS-CoV-2 sequences originally stored on SRA; https://www.biorxiv.org/content/10.1101/2021.06.18.449051v1

Dr. Bloom mentioned that he had spoken to Dr. Stephen Sherry of NCBI about the request from the authors to delete the sequences.

I'm writing about the preprint. If possible, I'd like to see a copy of the email from the scientists who requested the deletion. The project is Bio-Project PRJNA612766 by Aisu Fu and colleagues at Wuhan University.

I'd like to know why they requested its deletion, if they gave any reason.

NIH is aware of Dr. Bloom’s preprint submission. Staff at the National Library of Medicine, which hosts the Sequence Read Archive (SRA), have reviewed the submitting investigator’s request to withdraw the data. These SARS-CoV-2 sequences were submitted for posting in SRA in March 2020 and subsequently requested to be withdrawn by the submitting investigator in June 2020.

The requestor indicated the sequence information had been updated, was being submitted to another database, and wanted the data removed from SRA to avoid version control issues. The submitting investigator published relevant information about these sequences by preprint in March, 2020 and in a journal in June, 2020. Submitting investigators hold the rights to their data and can request withdrawal of the data.

page 22 From: Myles, Renate (NIH/OD) [E] Sent: Monday, June 21, 2021 Hi all- The attached paper was submitted to BioRx for preprint. The researcher is focusing on early genome sequence data on SARS-CoV-2 that the submitter requested be deleted. Unfortunately, the author of the paper is assigning motive and suggesting that the purpose of deletion was to obscure its existence. Below are reactive statement and QA in case we get media interest. Please let me know ASAP if NLM has any concerns with this language. (reply Q & A redacted )

page 75/238 (additional detail redacted) From: (redacted) Received: Fri Jun 05 2020 21:45:04 GMT-0400 (Eastern Daylight Time) To: Bioproject Support bioprojectheip@nchinim.nih.gor; I want to retract a submission, and the BioProject ID is priNA637497. I'm sorry for my wrong submitting. Thank you for your help.

U.S. Right to Know obtained the WIV-UTMB memorandum of understanding through the Texas Public Information Act as part of an investigation into risky viral research funded through taxpayer dollars.

A memorandum of understanding between the Wuhan lab and the Galveston National Laboratory at the University of Texas Medical Branch states that each lab can ask the other to return or “destroy” any so-called “secret files” — any communications, documents, data or equipment resulting from their collaboration — and ask that they wipe any copies.

“The party is entitled to ask the other to destroy and/or return the secret files, materials and equipment without any backups,” it states.

“All cooperation … shall be treated as confidential information by the parties,” the agreement states.

The directors of the maximum biocontainment labs in Wuhan and Texas announced a formal cooperative agreement in Science in 2018. The labs are two of just a handful of facilities in the world that do similar cutting edge work on novel coronaviruses. The lab in Texas, with funding from the National Institutes of Health, was doing biosafety training with the lab in Wuhan, which operates under the Chinese Academy of Sciences. The labs also intended to do joint research projects and share resources, according to the agreement.

The revelation that the Wuhan lab retained the right to call for the destruction of data on U.S. servers funded by U.S. taxpayers comes amid a debate about what sort of investigation is necessary to exculpate the city’s coronavirus research from suspicions it sparked the COVID-19 pandemic. It also raises questions about assurances from Wuhan Institute of Virology senior scientist Zhengli Shi that she would never delete sensitive data.

The clause also raises a number of legal red flags for the Texas lab, experts say.

“The clause is quite frankly explosive,” said Reuben Guttman, a partner at Guttman, Buschner & Brooks PLLC who specializes in ensuring the integrity of government programs. “Anytime I see a public entity, I would be very concerned about destroying records.”(more)

A number of clunky or unusual provisions in the agreement suggests it may have been drafted at least in part by Chinese partners and translated into English.

For example, it states nothing in the agreement should be construed as establishing a relationship between “master and servant,” unusual language in modern American legal documents.

Other documents obtained by U.S. Right to Know demonstrate that despite the formal collaboration, Galveston National Laboratory faced delays in obtaining a sample of SARS-CoV-2, the virus that causes COVID-19, from its partner lab at the pandemic’s epicenter. The Texas lab ended up obtaining its first sample 9) from the U.S. Centers for Disease Control and Prevention.10) 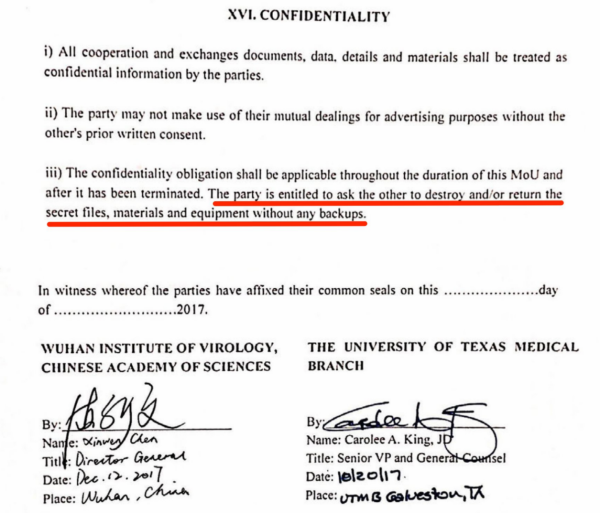 A prominent research lab in China can ask its partner institution in Galveston to destroy records of their joint work, including “secret files, materials and equipment,” according to a memorandum obtained by the nonprofit news organization U.S. Right to Know (USRTK) and shared with the Houston Chronicle.

Dr. James Le Duc, the director of the Galveston National Laboratory at the University of Texas Medical Branch, signed the nine-page memorandum of understanding, which lays out the terms of collaborative efforts with the Wuhan Institute of Virology, in 2017. The two research labs, which study some of the most dangerous pathogens in the world, have had a relationship since 2013 and announced a formal cooperative agreement in 2018.

The Wuhan lab, located in the city where the first COVID-19 cases were reported, has also been the subject of speculation over whether the virus leaked from its facility. Chinese health leaders and other scientists have shot down the theory, and recent studies suggest the virus originated elsewhere.

“The party is entitled to ask the other to destroy and/or return the secret files, materials and equipment without any backup,” according to the memo, which also states that the provision is in place beyond the agreement’s five-year term.

Lawyers say the memo’s broad language raises legal questions about UTMB’s record-keeping methods, though the university denies destroying any records as part of the agreement.12)