Ivermectin is an antiparasitic agent with antiviral properties that is approved by the FDA and WHO for a myriad of treatments. It is listed as an essential medicine by the WHO.

The bacterium Streptomyces avermictilis was first discovered in the soils of Japan in the 1960s by Satoshi Ōmura while searching for new antibacterial agents. After some altering to improve its safety the resulting compound was dubbed ivermectin. It was first approved for use in animals in 1981 and later in 1987 for the treatment of river blindness in sub-Saharan Africa. Since then Merk Laboratories have donated billions of doses globally for the treatment of onchocerciasis and lymphatic filariasis and other worm-caused diseases. William C.

A paper titled 'Ivermectin, ‘Wonder drug’ from Japan: the human use perspective' by Crump & Omura.1)

In 2015 William Campbell and Satoshi Ömura were awarded a Nobel Prize for the drug.2)3)

The Global Disinformation Campaign Against Ivermectin in COVID-19 (Part I) is a Substack piece, written by Pierre Kory on January 6, 2021.4)

Touted in the mainstream press as “horse dewormer,” ivermectin is that and more. It is important to take into consideration that any acceptance of ivermectin as a viable treatment for covid-19 puts at risk the vaccination campaign under Emergency Use Authorization and all policies associated with it.

August 26 2021, the CDC issued a 6) titled “Rapid Increase in Ivermectin Prescriptions and Reports of Severe Illness Associated with Use of Products Containing Ivermectin to Prevent or Treat COVID-19”. It later emerged that this was based on scant evidence; just three cases of alleged ivermectin side effects, two involving animal formulations. No patient died; one appeared to have been hospitalized, and one declined any medical help.

The most serious case involved a man, seventy-seven, who had was said to have taken a dose of ivermectin “apparently meant for an 1800 lb. bovine.” He had “hallucinations and tremors, which improved but he was eventually diagnosed with COVID-19” for which he needed only supplemental oxygen.

In two other cases, a woman who took the human form of the drug was said to have suffered “some confusion.” Another woman had “subjective visual disturbances” after taking “a product meant for sheep” but declined medical help. These side effects are in keeping with what the National Institutes of Health calls a “well-tolerated” anti-parasitic drug with such adverse effects as “dizziness, pruritis, nausea, or diarrhea.”

The secondary source for the above case details is from a Michael Capuzzo Substack post here.

2021 August 21 FDA Twitter account even partook in the demonization of the medication with a condescending tweet saying “You are not a horse. You are not a cow. Seriously, y'all. Stop it.”

The snarky FDA tweet has a link to FDA website with text that says, “Why you should not use Ivermectin to treat or prevent COVID-19 - Using the Drug ivermectin to treat COVID-19 can be dangerous and even lethal. The FDA has not approved the drug for that purpose.”7)8)

On September 1, 2021 the a story came out of of Oklahoma of an excess number of calls to poison control and hospitalizations due to individuals taking ivermectin, in particular of the horse-paste formulation.9)10)

In late September, 2021, the news broke, in The Hill and elsewhere, that there had been two deaths from ivermectin overdoses in New Mexico. This emerged an announcement of "ivermectin toxicity" from David Scrase, the top health official in the state. On December 1, 2021, Scrase 11), calling his earlier assertions “offhand,” and admitting they were groundless. The two deaths were not caused by ivermectin after all. In fact, the two people died because they “actually just delayed their care…”.

Also in late September, 2021, the Washington Post published an article claiming that, in Mississippi, State Epidemiologist Paul Byers was claiming that “at least 70 percent of the recent calls” to the state's poison control center have been related to the ingestion of ivermectin “purchased at livestock supply centers.” In a later 12), carried by the Post, it turns out the actual number of calls to poison control about ivermectin was about 2 percent.

On May 12, 2021, The Indian Express published 13) entitled 'Uttar Pradesh government says early use of Ivermectin helped to keep positivity, deaths low, and with the subtitle 'Claiming that timely introduction of Ivermectin since the first wave has helped the state maintain a relatively low positivity rate despite in its high population density'.

December 13, 2021: A letter from the FDA appears to signal that the agency may start taking action against those offering ivermectin to treat Covid-19.15)

2021 September 13 - UK Guardian 'An Oklahoma doctor has said overdoses of the anti-parasitic drug ivermectin, which many believe without evidence can prevent or cure Covid-19, are helping cause delays and problems for rural hospitals and ambulance services struggling to cope with the resurgent pandemic.“16)

Poison control centers are seeing a dramatic surge in calls from people who are self-medicating with ivermectin, an anti-parasite drug for animals that some falsely claim treats COVID-19.17)

“Tsk, tsk, tsk, Oklahomans. Hospitals are for people who refused vaccinations and are now in the ICU with intubation tubes jammed down their throats. We can only handle one bone-jarringly stupid sociological trend at a time. Maybe just, I don’t know, get the vaccine? Come on! Come join our Borg hive, Planet of the Horse People! What do you have to lose?

McElyea also told Rolling Stone that symptoms of ivermectin overdose are not limited to “ordinary” reactions such as vomiting, nausea, and muscle aches. “The scariest one that I’ve heard of and seen is people coming in with vision loss,” McElyea told the magazine.

Really, now. What do people imagine is in this vaccine that can be worse than vision-altering horse chemicals? Even if Bill Gates and George Soros were able to track me with a microchip now, at least I can still read the magnesium content in my oat cakes.”18)

“Internal documents obtained by Motherboard through a Freedom of Information Act FOIA request show that the federal Food and Drug Administration was absolutely delighted to do a fire tweet discouraging the use of ivermectin as a treatment for COVID-19. In internal emails, supervisors with the agency’s public affairs office congratulated the author of the tweet for their “clever (humorous)” approach, suggesting the agency will employ more humor in its desperate, often ineffective efforts to keep the American public from continuing to poison themselves with unproven treatments for the novel coronavirus.”19)

The Global Disinformation Campaign Against Ivermectin in COVID-19 (Part I) The tactics deployed by the pharmaceutical industry in their decades-long war on generic drugs reached a zenith during COVID-19… and have resulted in true crimes against humanity. Substack by Pierre Kory

Now, before we delve deeper into the workings of the most heinous disinformation campaign ever waged by the pharmaceutical industry in history (and also it’s most successful so far as 75% of the earth’s inhabitants still have not been recommended to use it to treat COVID), I will ask you not to just “take my word for it” but instead take you on a brief, guided tour of the insanely positive evidence base supporting the use of ivermectin in COVID-19.21)

A nightmarish true story of how a researcher, Dr. Andrew Hill from the University of Liverpool, who could have saved hundreds of thousands of lives, mysteriously decided not to and was called out by Dr. Tess Lawrie, an independent WHO researcher, and Director of the Evidence-based Medicine Consultancy in Bath, England.22)

“After completion, the study confirms the safety of ivermectin up to a dose of 100 μg / kg / day in continuous administration over 1 month in healthy volunteers. No significant difference was observed between the treated volunteers and the placebo volunteers in the three cohorts studied successively (daily doses of 50 μg / kg, 75 μg / kg and 100 μg / kg respectively).”

2021 December “The PRINCIPLE trial led by the University of Oxford has put the ivermectin arm of the study is on “hold” due to “temporary supply issues.” Yeh, right…”

TrialSite has chronicled the ivermectin studies, including the important PRINCIPLE trial led by the University of Oxford. Now, interestingly, the prestigious Anglo-academic research center has announced the ivermectin arm of the study is on “hold” due to “temporary supply issues.”24)25)

==Research Gate, February 2022 == DOI:10.13140/RG.2.2.20069.68320 Strictly regular use of ivermectin as prophylaxis for COVID-19 leads to a 90% reduction in COVID-19 mortality rate, in a dose-response manner: definitive results of a prospective observational study of a strictly controlled 223,128 population from a city-wide program in Southern Brazil.

The results of this study clearly demonstrate that prophylactic use of ivermectin must be initiated immediately for people in high risk categories in the United States and worldwide. This includes individuals with one or more co-morbidities and the middle aged/elderly. Our “design-to-fail” government funded clinical trials for early treatment and governmental obstructionism regarding life saving treatments to patients must end now.

The CDC chart below for all deaths since the start of the outbreak clearly shows a jump in deaths after 50 years old.

However, as the data for deaths per million per age group is not disclosed, so the age for start of prophylaxis has yet to be determined.

As Omicron has less pathogenicity and slightly different disease profile this too could influence what age prophylaxis treatment should begin. But the data are in, prophylactic use of ivermectin saves lives. 28)

Update (1505ET): As more and more information pours out of the Project Veritas leaked military documents, there appears to be a damning section in support of Ivermectin as a Covid-19 treatment.

“Ivermectin (identified as curative in April 2020) works throughout all phases of illness because it both inhibits viral replication and modulates the immune response.”29)

On Tuesday, U.S. Sen. Ron Johnson (R-Wis.), ranking member of the Permanent Subcommittee on Investigations, sent a letter to Department of Defense (DOD) Secretary Lloyd Austin and Under Secretary of Defense for Research and Engineering Heidi Shyu demanding information on an August 2021 disclosure from U.S. Marine Corps Major Joseph Murphy. The senator has learned that this disclosure was sent to the DOD Office of the Inspector General (OIG) and that office referred it to DoD’s Office of Research and Engineering for investigation.

The senator wrote, “According to the Major’s disclosure, EcoHealth Alliance (EcoHealth), in conjunction with the Wuhan Institute of Virology (WIV), submitted a proposal in March 2018 to the Defense Advanced Research Projects Agency (DARPA) regarding SARS-CoVs. The proposal included a program, called DEFUSE, that sought to use a novel chimeric SARS-CoV spike protein to inoculate bats against SARS-CoVs. Although DARPA rejected the proposal, the disclosure alleges that EcoHealth ultimately carried out the DEFUSE proposal until April 2020 through the National Institutes of Health and National Institute for Allergy and Infectious Diseases. The disclosure highlights several potential treatments, such as ivermectin, and specifically alleges that the EcoHealth DEFUSE proposal identified chloroquine phosphate Hydroxychloriquine and interferon as SARS-CoV inhibitors.” 30)

The full text of the letter can be found here 31) 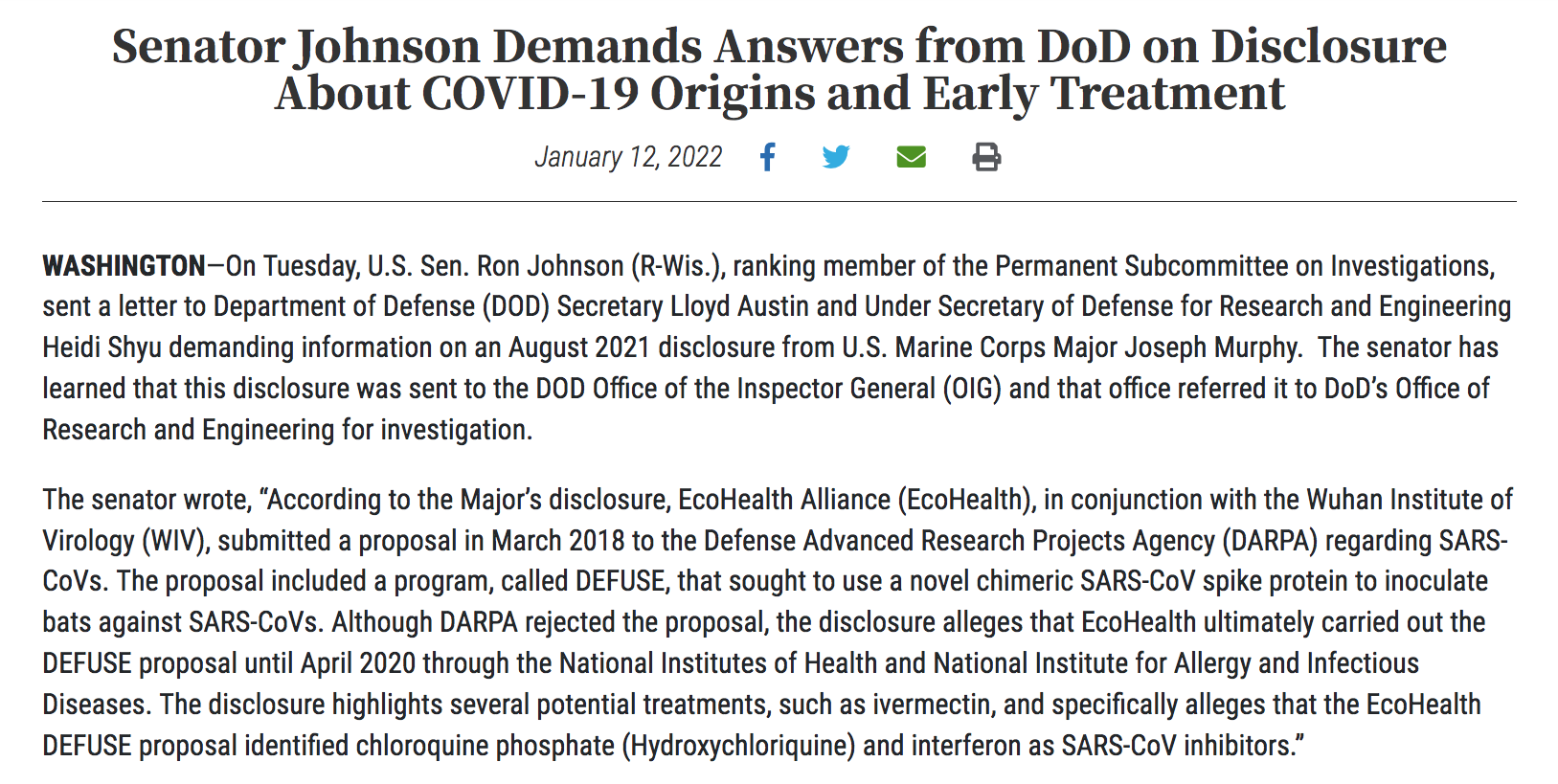 Review on the mechanisms of action