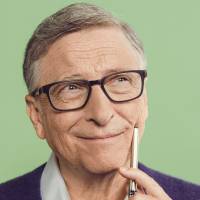 Bill Gates is the son of William Henry Gates II, a law firm founder and head of Planned Parenthood2), and Mary Maxwell Gates, who served on the Board of Directors for BancSystem and the United Way of America.

Bill's materal grandfather, J.W. Maxwell, was a banker, and his father, also named James Willard Maxwell was president of the National Ciuty Bank in Seattle and director of the Seattle branch of the Federal Reserve Bank of San Francisco.

Gates was in the 1992-1993 inaugural class of Global Leaders for Tomorrow under the World Economic Forum, alongside Tony Blair, Gordon Brown, Angela Merkel, Lawrence Summers and possibly Vladimir Putin.3)

Back in 2009, there was a meeting in New York of billionaires Bill Gates, Warren Buffett, David Rockefeller, Eli Broad, George Soros, Ted Turner, Oprah, Michael Bloomberg and others. One of the many topics on the agenda was population control.

“ Bill Gates Wants to Create a Dystopia” by Toby Green in Unherd.

There's a real disconnect between what Gates says and writes with regard to the pandemic, and future ones, and what he actually does in terms of how he lives and where he invests. 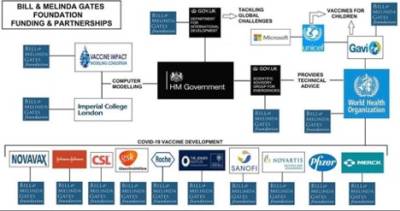 An interesting article from GMWatch, dating back to 2011, flags up many of the realities that we clearly see emerging today. Although the article focuses mainly on the GM debate, medicine comes up frequently. Here are some key points from the article;

In addition to becoming the largest farmland owner in the United States, Gates invests in a variety of agricultural technologies.

Gates enrolled at Harvard University in the fall of 1973. Dropping out in 1975, Gates completed no more than 2 years of higher education.