Critiques of the Fact Checker Paradigm

“At their worst, they’re doing opinion journalism under pseudo-scientific banners, something that’s really corrosive to actual journalism, which if it’s any good is about reported fact in the first place” (Ben Smith, Politico, Aug. 17, 2011).

Barbara Joanna Lucas wrote an overview piece for the Capital Research Centre back in 2017, giving the origin story of the fact-checking industry, and of some of the key players.1)

More Recently Sharyl Attkisson has reported on how fact-checking is done: https://www.globalresearch.ca/how-fact-checking-controlled-faked/5769904

At the heart of the world of the fact-checkers lies the International Fact-Checking Network (IFCN)2), launched in 2015 and hosted by the Poynter Institute for Media Studies.3) The IFCN is funded by, among others, George Soros’ Open Society Foundations 4), the Bill & Melinda Gates Foundation 5), Google, the National Endowment for Democracy 6) and the foundation run by Craig Newmark, founder of Craigslist 7)8). Another funder is the Omidyar Network 9), the not-for-profit founded by Pierre Omidyar, founder of eBay.

Reuters has moved into the fact-checking space, supposedly independent and with no conflicts of interest that may skew their decisions either way. The fact that James Smith, a director of Pfizer, was also President, Chief Executive Officer and Director of Thomson Reuters Corporation, a “provider of intelligent information for businesses and professionals”, from 2012 until 2020, massively undermines any independence that Reuters may claim with regard to the controversy over vaccines and vaccine safety.10)

“After months of trying everything else, Twitter announced a partnership with The Associated Press and Reuters to fight misinformation.”11) Reuters is also a member of the Trusted News Initiative. “The Trusted News Initiative partners will continue to work together to ensure legitimate concerns about future vaccinations are heard whilst harmful disinformation myths are stopped in their tracks.”12) — Tim Davie, Director-General, BBC

Politifact, launched in 2007, was acquired by the Poynter Institute in 2018 and states that it is financially self-sustaining, while at the same time stating that Facebook and TikTok each contributed more than 5% of their revenues in 2020 and revealing the “Truth Squad”, a membership campaign “to allow individual donations”.

Matt Shapiro, from the Paradox Project14), does a deep dive here15) into the patterns seen in the way Politifact operate, and the tactics they use to smear and de-platform content that does not fit the narrative they are hired to promote, ultimately giving them a truth rating.

Facebook and Tik Tok each provide more than 5% of Politfact's funding.16)

On the same page, however, under 2016 contributions, they admit that the Bill & Melinda Gates Foundation donated $126,650 “to fact-check claims about global health and development in partnership with Africa Check.” The sum for the same purpose was $70,000 in 2015, that was part of a larger donation of $382,997 to Poynter as a whole. How likely is it that such donations are given without any expectations of content control? 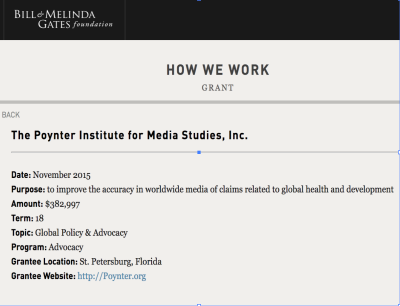 FactCheck.org was launched in December 2003 and is mostly funded by the mulit-billion dollar Annenberg Foundation.17)

US Representative Thomas Massie revealed earlier in 2021 that FactCheck.org, brought in by Facebook to tackle Covid-19 misinformation, also receives funds 18) from the Robert Wood Johnson Foundation 19), which currently owns $1.8 billion in J&J stock. The CEO of the Robert Wood Johnson Foundation, Richard Besser, is a former acting director at the CDC.

This is Russell Brand's take on this blatant conflict of interests.

AAP FactCheck (Trusted. Accurate. Impartial) is the Australian Associated Press, who bought the former Australian Associated Press Pty Ltd Newswire and FactCheck businesses on August 4, 2020. They are an “independent not-for-profit organisation” with “no owners or shareholders. It is constituted by a small group of members who have no ownership rights over the organisation. The organisation is governed by a board of elected directors”. They are quite coy about their funding, though they do state that;

AP Fact Check has for years been a member of the International Fact-Checking Network (IFCN), a unit of the Poynter Institute dedicated to bringing together fact-checkers worldwide.

We produce fact checks when we are presented with a claim from a newsmaker – in any format – that deserves further explanation or scrutiny. The AP Fact Check team, along with our experts in the field, investigates and reports out that claim to present the facts around it. These claims can come from newsmakers from any news department, and they are fact-checked by our AP experts, with oversight, guidance and reporting help from the AP Fact Check team.

The AP Fact Check team also produces items that debunk misleading or false information and visuals that are gaining significant traction online. This includes collaborative projects with Facebook and Twitter to add factual context to misleading posts on their platforms.

Want to reach out with a comment or fact-checking suggestion? Do you see something that needs a correction? Email us at FactCheck@ap.org.

You can also file a complaint with the International Fact Checking Network if you feel that AP or any other IFCN member has violated the fact-checkers’ code of principles.

The AP is an independent, not-for-profit news cooperative composed of newspapers and broadcasters. The vast majority of AP’s revenue comes from licensing content to news outlets and other organizations. The AP Fact Check team is funded by AP’s general news budget and has previously received funding from the Knight Foundation. 22)

The Centre for Countering Digital Hate

The Centre for Countering Digital Hate (CCDH) are a tiny pressure group, based in London and Washington, D.C., who appear to wield a great deal of power, out of all proportion to their size.23) They have a history of going after those who spread actual hate online (Isis, racists, anti-Semites and so on), as well as 'climate change deniers', and have now pivoted into closing down “the anti-vaxx industry”.24) Indeed, it was the CCDH who created the original 'Disinformation Dozen' list.25)

The founder, Imran Ahmed, has had letters published in Nature26), and has said that, “I would go beyond calling anti-vaxxers conspiracy theorists to say they are an extremist group that pose a national security risk.”27)

Rachael Riley, a minor TV celebrity and outspoken critic of anti-Semitism in the UK Labour Party, is their Ambassador.28)29) There's no mention of any employees because they don't have any. One of their board members, Damien Collins, is a Conservative MP who writes extensively about online safety30) and was once Chair of the House of Commons Digital, Culture, Media and Sport Select Committee (DCMS). Under his watch, his department wrote, ““Social media users need online tools to help them distinguish between quality journalism, and stories coming from organisations that have been linked to disinformation or are regarded as being unreliable sources. The social media companies should be required to either develop tools like this for themselves, or work with existing providers, such as Newsguard.”31)

Another is Simon Clark, “a non resident senior fellow for the policy think tank the Center for American Progress (CAP) and an adviser to the Scowcroft Group. He is also the Chairman of Foreign Policy for America (FP4A) […] the first director of Web Services for the global news agency Reuters (called Thomson Reuters since 2008).”32)

As an interesting aside, the afore-mentioned CAP put out a report in July 2020 called 'A Comprehensive COVID-19 Vaccine Plan' that calls on politicians to “Plan a massive vaccination campaign by recruiting medical experts, sports stars, celebrities, and community leaders and partnering with grassroots organizations and medical organizations.”33)

Other CCDH board members are;

In the interest of balance, Facebook recently defended it's fact-checking activities in a court filing. Their response, in essence, was to say that their fact-checks need not be facts as such, but rather just “protected opinion”. In other words, “Facebook wants the ability to allow fact checkers to accuse their users of lying and censor and ban users based on those “fact checks,” but not to have any liability for accusing those users of lying”.

In this particular instance, Facebook outsourced the fact-checking exercise to Climate Feedback, since the topic was about the 2020 forest fires. Climate Feedback are members of the IFCN.42)

Newsguard currently has its own Campfire page here. This organisation — by virtue of its deep connections to government and Silicon Valley — is lobbying to have its rankings of news sites installed by default on computers in U.S. public libraries, schools, and universities as well as on all smartphones and computers sold in the United States.

Another bid for the status of uber-fact checker comes in from the US government who, through the Copyright Office, is considering the idea of mandating a content upload filter on the internet.43)

The COVID Tracking Project was cited in more than 1,000 academic papers, including major medical journals like The New England Journal of Medicine NEJM, Nature, and JAMA.

We received awards for our work from the Society of Professional Journalists, the Sigma Awards, and the NYU Journalism Online Awards.

Our data was used by two presidential administrations and an array of federal agencies, including the CDC, HHS, and FDA.

Federal lawmakers used our data in at least 11 letters demanding answers on the pandemic response from government leaders and commercial labs.

And our data was cited in over 7,700 news stories in publications including The New York Times, The Washington Post, CNN, Vox, ProPublica, and many more. 44)

Our work continues thanks to the generous support of the Beneficus Foundation, Emerson Collective, the Robert Wood Johnson Foundation, the Rockefeller Foundation, and Patrick J. McGovern Foundation. Chan Zuckerberg Initiative 45)

Jessica Malaty Rivera, MS - Science Communication Lead at The Pandemic Tracking Collective Rockefeller Foundation biography - She is currently the Science Communication Lead for The COVID Tracking Project at The Atlantic, a researcher with the COVID-19 Dispersed Volunteer Research Network, a research affiliate at Boston Children’s Hospital Innovation & Digital Health Accelerator, and an expert contributor for NBC Bay Area and CNN. Jessica was recently named one of the World’s 50 Greatest Leaders by Fortune Magazine for her work on COVID-19 research and data communication. Between her day jobs and being a full-time mother to two little kids, she also dedicates several hours a week to promoting science literacy and debunking misinformation on social media. 46)

'270 doctors’ called out Joe Rogan, but the authors of the letter and the vast majority of its signatories are not medical doctors Only a handful are practicing physicians.47)

The Dossier by Jordan Schachtel Substack “As physicians, we bear the arduous weight of a pandemic that has stretched our medical systems to their limits and only stands to be exacerbated by the anti-vaccination sentiment woven into this and other episodes of Rogan’s podcast.”

Paradoxically, the disseminators of this petition are guilty of the very misinformation label that they’ve attached to Rogan. In fact, neither of the two reported co authors of the letter — Jessica Rivera and Ben Rein — possess medical degrees. Rivera holds a master’s degree and Rein is a PhD academic who researches psychiatry.

The letter denouncing Joe Rogan and pressuring Spotify to censor his speech has all kinds of random signatories. By my count, the letter is signed by over 50 PhD academics, around 60 college professors, 29 nurses, 10 students, 4 medical residents, and even a handful of… science podcasters. 48)

The editor of the British Medical Journal was forced to write to Mark Zuckerberg in December 2021, pointing out a ridiculous, error-prone “fact check” that was done for Facebook. This BMJ article covered the Ventavia whistleblower who raised questions and concerns about data integrity and regulatory oversight at Pfizer’s pivotal Covid-19 vaccine trial.