Klaus Martin Schwab is the Founder and Executive Chairman of the World Economic Forum (WEF), the self-described International Organization for Public-Private Cooperation.

Klaus is the son of Eugen Schwab, born April 27, 1899 and deceased in 1982. Eugen was the Managing Director of the Nazi-supported German branch of Swiss engineering firm Escher-Wyss & Cie.3) 4) He was also the Vice President and President of the Ravensburg Chamber of Commerce, and member of the Ravensburg Rotary.

Schwab has two degrees, one in Economics and one in Engineering, both from Swiss universities and a Master of Public Administration from the John F. Kennedy School of Government.6) 7) While attending Harvard, Schwab found a mentor in former National Security Advisor and Secretary of State Henry Kissinger.8)

In 1972, Schwab became one of the youngest professors on the faculty of the University of Geneva.9)

He is Founder and Executive Chairman of the World Economic Forum, the international organization for public-private cooperation.

He founded the Forum in 1971, the same year in which he published Moderne Unternehmensführung im Maschinenbau (Modern Enterprise Management in Mechanical Engineering). In that book, he argued that the management of a modern enterprise must serve not only shareholders but all stakeholders (die Interessenten), to achieve long-term growth and prosperity. Schwab has championed the multistakeholder concept since the Forum’s inception, and it has become the world’s foremost platform for public and private cooperation.13)

In 2004, with the financial contribution received as part of the Dan David Prize, he established a new foundation; the Forum of Young Global Leaders (targeted at leaders under 40). Seven years later, in 2011, he created the Global Shapers Community (targeted at potential leaders between the ages of 20 and 30). The purpose of the two foundations is to integrate young people as a strong voice for the future into global decision-making processes and to encourage their engagement in concrete projects that address social problems.

Schwab has encouraged the establishment of communities providing global expertise and knowledge for problem-solving. Among them is the [Network of Global Agenda Councils, comprising more than 1,500 of the most relevant experts related to global, regional and industry challenges.

The Forum employs over 500 people, with its headquarters in Geneva, Switzerland, and additional offices in New York, Beijing and Tokyo.

Professor Schwab’s vision for what would become the World Economic Forum grew steadilly as a result of achieving ‘milestones’. Events in 1973, namely the collapse of the Bretton Woods fixed exchange rate mechanism and the Arab-Israeli War, saw the Annual Meeting expand its focus from management to economic and social issues. Political leaders were invited for the first time to Davos in January 1974.

Two years later, the organization introduced a system of membership for ‘the 1,000 leading companies of the world’. The European Management Forum was the first non-governmental institution to initiate a partnership with China’s economic development commissions, spurring economic reform policies in China. Regional meetings around the globe were also added to the year’s activities, while the publication of the Global Competitiveness Report in 1979 saw the organization expand to become a knowledge hub as well.

In 1987, the European Management Forum became the World Economic Forum and sought to broaden its vision to include providing a platform for dialogue. World Economic Forum Annual Meeting milestones during this time include the Davos Declaration signed in 1988 by Greece and Turkey, which saw them turn back from the brink of war, while in 1989, North and South Korea held their first ministerial-level meetings in Davos. At the same Meeting, East German Prime Minister Hans Modrow and German Chancellor Helmut Kohl met to discuss German reunification. In 1992, South African President de Klerk met Nelson Mandela and Chief Mangosuthu Buthelezi at the Annual Meeting, their first joint appearance outside South Africa and a milestone in the country’s political transition.

In 2015, the Forum was formally recognised as an international organisation. It is now on the next phase of its journey as the global platform for public-private cooperation. 14)

Klaus had all of his schooling bankrolled by Escher-Wyss financiers in Zurich just as his father Eugen Schwab, as managing director of Escher-Wyss & Cie. (Co.) in Ravensburg was forming the Ravensburg Chamber of Commerce and Industry as vice-president (1945-46).

Eugen formed the Ravensburg Chamber of Commerce at the behest of Sir Winthrop W. Aldrich (Rockefeller, Henry Kissinger’s and Paul Volcker’s boss), Allan W. Dulles (OSS/CIA Bern, Switzerland), and the Bank for International Settlements set up by MI6 and the CIA. 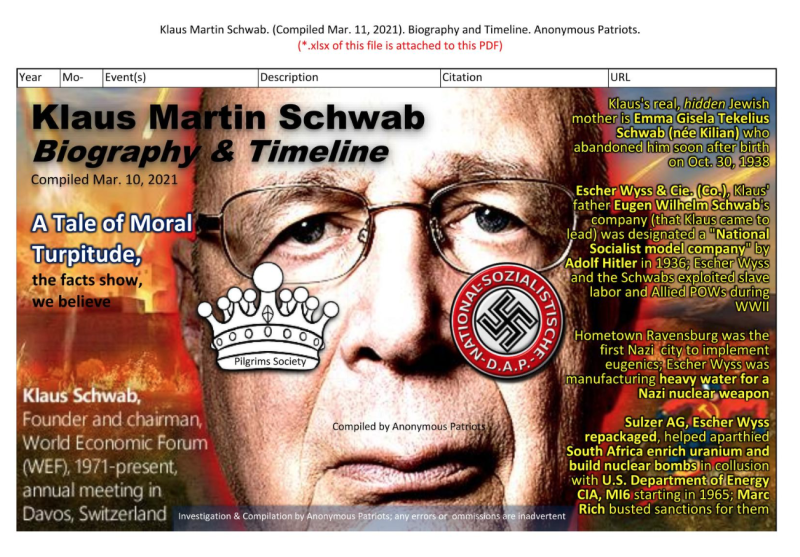